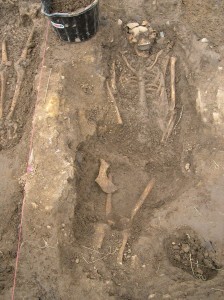 Two skeletons discovered with large stones wedged into their mouths, were buried in this way around 1300  years ago to stop them rising from their graves to haunt the living , a new documentary featuring the work of archaeologists at IT Sligo will suggest.

Such “deviant burials” are associated with vampires and also with revenants or ghosts who were believed to  come back among the living,  unless  steps were taken to contain them in their graves.

The skeletons, both male, were found side by side in a historic site overlooking Lough Key Co Roscommon, and according to Chris Read, lecturer of Applied Archaeology at IT Sligo, this  is the only such  discovery of this kind in Ireland .

Similar discoveries have been made in Britain and other European countries. In 2006 the remains of a medieval “vampire” were discovered among the corpses of 16th century plague victims in Venice. The female skull had  a rock thrust  into the mouth ,  evidence that female “vampires” were often blamed for spreading the plague  through Europe, according to experts.

Read, along with his colleague Dr Thomas Finan from St Louis University in the US,  excavated 137 skeletons from a site at Kilteasheen, Knockvicar Co Roscommon  during a series of digs from 2005 to 2009,  in a project funded by the Royal Irish Academy. The archaeologists believe that there were close to 3,000 skeletons on the site spanning the centuries from 700 to 1400.

The two skeletons with stones in their mouths   were not buried at the same time but both were males – one elderly and the other a young adult.  Both are believed to have been buried in the 8th century. This puts them outside the time frame for vampires – a phenomenon which emerged in European folklore around the 1500’s.

Read explained  that this remarkable discovery,  which is to be featured next Tuesday (September 13th)  in a British  Channel 5 documentary,  could reflect the ancient  fear of revenants  who were believed to have had  the power to come back from their graves to harass their loved ones or others against whom they had a grudge. The documentary is to be broadcast on the National Geographic channel early next year.

“One of them was lying with his head looking straight up and a large black stone had been deliberately thrust into his mouth while the other  had his head turned to the side and had an even  larger stone,  wedged quite violently into his mouth so that his jaws were almost dislocated,” explained the archaeologist.

He and a colleague, osteo archaeologist,  Dr. Catriona McKenzie  carried out detailed tests on the skeletons at IT Sligo this summer.

Read stressed that the revenant theory would be impossible to prove absolutely,   but said  there was no doubt that the skeletons had been subjected to deviant burials which are sometimes  associated with demonic possession. Revenants or the “walking dead”  often tended to be people who were outsiders in society when living, according to the IT Sligo lecturer .

There is a known tradition of revenants in Irish folklore and indeed it has been suggested that Bram Stoker got the inspiration for Dracula, not from a Romanian folk tale, but from an Irish legend about an evil chieftain  who had to be killed three times after he came back looking for a bowl of blood to sustain him.

The IT Sligo/St Louis team became interested in the Kilteasheen site because of its links to the O’Conor kings of Connacht and also because of historical references to a Bishop’s Palace which had been constructed there in the 1200’s. They were amazed to discover that a raised platform on the land owned by John and Tina Burke from Knockvicar, was in fact a burial ground which had been used over several centuries.  Initially, considerable circumstantial evidence prompted speculation that they had found a  Black Death-related burial ground,  but   radio carbon dating ruled that theory out. Read pointed out that Kilteasheen is adjacent to the Boyle river which was a “medieval motorway” linking  Lough Key with  the Shannon. But the layers of history there go back much further as a number of pre-historic artefacts including stone tools and arrow heads were also found on the site.

The Kilreasheen Archaeological Project will feature in the “Revealed” series on Channel 5 at 8pm on Tuesday September 13th. The series is being produced by Bafta-nominated Mark Fielder, director of the independent production company QuickFireMedia.