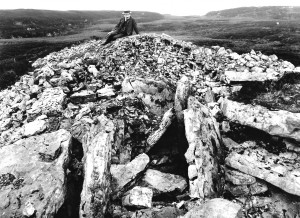 A series of talks organised by IT Sligo and the North-West Archaeology Group will be held in the Institute this Thursday to mark the 100 year anniversary of the opening of the Carrowkeel passage tombs.

Four speakers, Dr Marion Dowd, Dr Robert Hensey, Padraig Meehan and Sam Moore, will address discoveries and research from Carrowkeel since the 1911 excavation, including new radiocarbon dates, the discovery of megalithic art and the identification of a further 96 hut enclosures on the Doonavera/Mullaghfarna plateau. The talks will include a biography of R.A.S. Macalister as well as a study of the relationship of caves with the Carrowkeel passage tombs.

The Carrowkeel complex is one of the four major passage tomb clusters of Ireland and is dramatically and prominently located on the north end of the Bricklieve Mountains. Very little was documented about these cairns until they were excavated in 1911 by R.A.S. Macalister, R.L. Praeger and E.C.R. Armstrong.

The lectures will take place this Thursday 13th October at 7.30pm in lecture room A0004, IT Sligo, which is located just inside the main entrance. Admission is free and all are welcome.

Another lecture by Sam Moore will be held in Ballinafad Community Hall on Friday 14th October, at 7.15pm and on Saturday at 2pm he will give a guided tour from Ballinafad Hall to the passage tombs and returning to Ballinafad. This is approximately a 10km walk over rough terrain and stout footwear, along with waterproof clothing, is essential.

IT Sligo Lecture Room A0004