Archaeologists at IT Sligo have discovered bones of a Stone Age child and an adult in a tiny cave high on Knocknarea mountain near the town.

Radiocarbon dating has shown that they are some 5,500 years old, which makes them among the earliest human bones found in the county.

The researchers say they are “thrilled”.

They discovered a total of 13 small bones and bone fragments in an almost inaccessible cave last November.

Three were from the child and 10 from the adult. They included foot bones and fragments of skull.

The adult was aged 30 to 39 and the child of 4 to 6 years. It was not possible to establish gender.

“It’s an enormously exciting discovery,” said Dr Marion Dowd of IT Sligo, who is Ireland’s only specialist in the archaeology of Irish caves.

“This might see like a small quantity but it has yielded fantastic results. The interest we’ve had since we announced the results on the IT Sligo Applied Archaeology Facebook page this week has have been unprecedented.”

It was a chance discovery by IT Sligo archaeology graduate Thorsten Kahlert while he was investigating a series of little known caves on the slopes of Knocknarea.

“I was surveying one small cave when something on the cave floor caught my eye,” he said.

“I took a closer look and realised it was a human foot bone.” Further examination revealed other bones strewn on the cave floor.

Dr Catriona McKenzie of Queen’s University Belfast, who is an archaeologist specialising in the analysis of human bones, examined the remains.

After Thorsten’s initial discovery, Dr Dowd immediately contacted the National Monuments Service. It promptly funded a rescue excavation by the two IT Sligo researchers who braved wet and windy weather as they retrieved the exposed bones to protect them from possible environmental damage.

Thorsten explained: “You have to squeeze through, head first, lying on your stomach, and after a while you get into a larger passage. It is an entirely natural cave but you have to crouch down. For the most part it is not possible to stand upright”.

Dr Dowd said: “Caves have been used by people in Ireland for thousands of years and human bones in them can date to any period.

“We were hoping for a Neolithic date because Queen Maeve’s cairn on the summit of Knocknarea Mountain is a Neolithic passage tomb. And then the news came through that the cave bones dated to that period. Significantly, too, it seems the adult had been placed there about 300 years before the child, who died about 5,200 years ago.”

Dr Dowd says that the small number of bones and their small size suggest that the cave was an excarnation site.

That involved a corpse being laid in a cave and, after decomposition, the dry bones being transferred elsewhere. Fragments were sometimes accidentally left behind.

Dr Dowd, who led the rescue excavation, says Sligo – Leitrim is one of Ireland’s most important cave regions but only a few have been investigated archaeologically.

Thorsten Kahlert is currently carrying out doctoral research on cave archaeology at IT Sligo where Dr Dowd is his academic supervisor.

He said: “What most people in Sligo do not realise, is that there are 26 caves dotted around the slopes of Knocknarea. Most of them are long narrow passages but the entrances are very small, so they tend to escape attention.”

Dr Dowd said:  “When people died in prehistory, their corpses were sometimes laid out in caves. After one or two years, when the flesh and soft tissue had decomposed, the dry bones were collected and removed to another location.

“So what we find at excarnation sites are small bones that were missed when the larger bones were collected and removed.”

“We can imagine, therefore, that Stone Age people in Sligo between 5,000 and 5,500 years ago carried the corpses of their dead up the mountain. After an arduous climb, they then squeezed through the narrow cave entrance, and laid the dead person on the cave floor.

“Sometime later, maybe after one or two years, people returned to the cave and collected the bones and took them to another location. Where they took them, we don’t know. But the monuments on the summit of Knocknarea are one likely possibility. All that was left behind in the cave were some small bones that had been overlooked”. 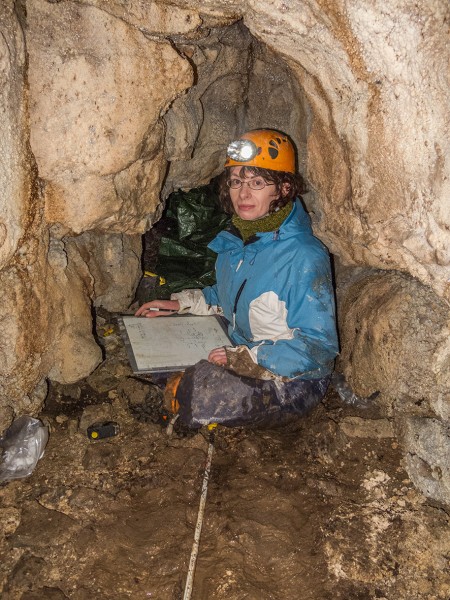 Dr Marion Dowd of IT Sligo who is Ireland’s only specialist in the archaeology of Irish caves, conducts a rescue excavation in a cave at Knocknarea which contained Stone Age human bones. 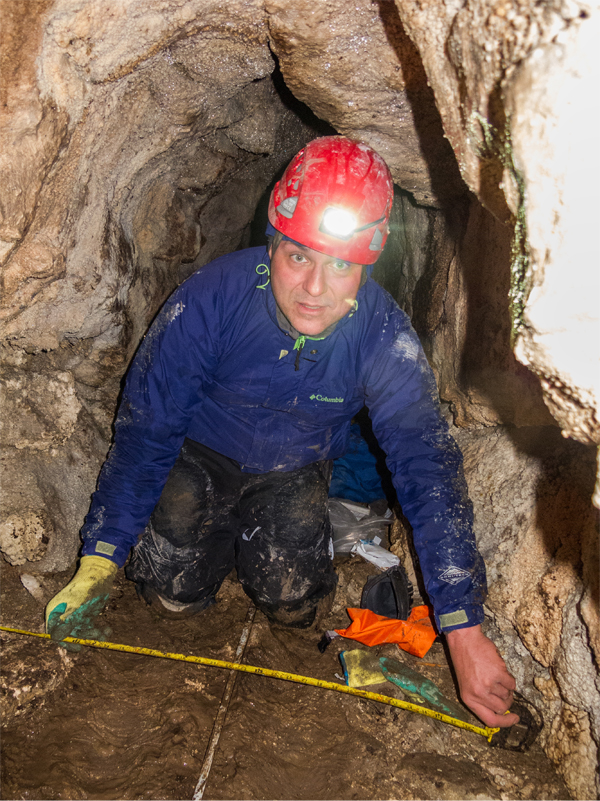 Thorsten Kahlert, who is carrying out doctoral research on cave archaeology at IT Sligo, surveys the Knocknarea cave which contained Neolithic period human bones.