Mayo gaelic footballer and IT Sligo graduate Andy Moran was back at college last week – to get his nails done – and to launch the Institute’s new Healthy Campus Programme for its students and staff.

Moran, who played a starring role in Mayo’s recent National Football League victory over Kerry, was in Sligo to lend his support to the Institute’s new Healthy Campus initiative, which commits the college to promoting health and wellness at all levels of its operations. 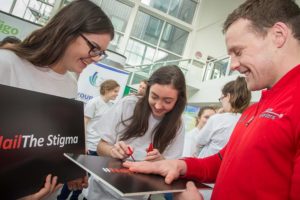 The Programme is also drawing on the talents of the Institute’s Health Promotion students who are using it as a platform to run various initiatives as part of their course work.

These include ‘Nail The Stigma’ – an initiative which aims to encourage students and staff to talk openly about their mental health. 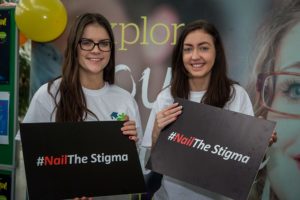 ‘Nail The Stigma’ is a student-led campaign which encourages students & staff at IT Sligo to talk openly about mental health.

“What we are promoting is a positive mental health campaign where we are asking individuals to paint their baby finger nail red and the take a video of themselves talking about how they are feeling,” explains Denise McDermott, who’s a final year Public Health & Health Promotion student at IT Sligo.

” Our overall aim is to reduce the stigma surrounding mental health in Ireland, and to encourage people to speak up and talk about how they are feeling.  The red nail will signify that we are stopping or nailing the stigma attached to mental health and talking out about your feelings while the baby finger nail represents that mental health issues are often not that recognisable in an individual.”

The students will hold a #NailTheStigma campaign day on campus on February 28th. 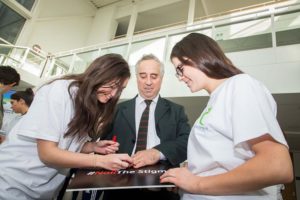 ‘Looking the Part’ – IT Sligo President Dr Brendan McCormack does his bit for the Institute’s #NailTheStigma campaign.

Addressing the issue of mental health is one of a series of initiatives during the eight-week Healthy Campus Programme at IT Sligo.

“We have the practical and teaching expertise on campus, and that enables us to be a step ahead in fostering health promotion for both staff and students.” says Yvonne Roache, who is the Institute’s Health, Safety & Welfare Officer.

“The Healthy Campus team includes IT Sligo academics and other professionals who specialise in health promotion, exercise, emotional health and the environment.”

A range of events and activities will take place on campus over the next eight weeks. These include morning yoga, couch to 5k run and weight loss classes as well as specific events such as ‘Wellness Wednesdays’ where there will be various talks and displays the will focus on emotional health, health checks and lifestyle, nutrition and exercise. 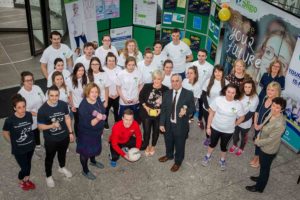 The President of IT Sligo, along with staff and students launched the Healthy Campus Programme 2017 last Thursday.