IT Sligo’s Writing & Literature lecturer, Una Mannion has released her debut novel “A Crooked Tree”, published by Faber & Faber to rave reviews.  In a special interview with Writing & Literature student, Kevin Gallagher, Una describes the process of her writing and how the plot of her book came about. 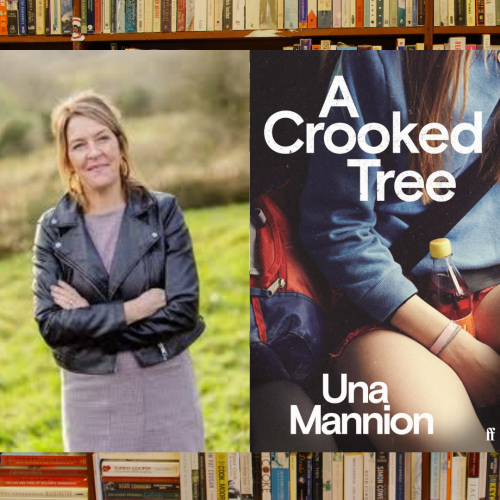 IT Sligo lecturer adds novel to her portfolio

Una Mannion was born the 6th of 8 children in Philadelphia, Pennsylvania. She studied English at the University of the South in Sewanee, Tennessee before returning to Philadelphia to complete a Masters in English at Temple University. Una is the recipient of numerous awards for poetry and short fiction, such as The Doolin short story prize, The Hennessy New Irish Writing Poetry Award, the Ambit fiction award, The Cúirt International Short Fiction Award, the Allingham short fiction prize, as well as various other prizes. Una has taught at the Institute of Technology Sligo for over twenty years, and is programme chair of BA in Writing & Literature at IT Sligo. Her debut novel A Crooked Tree was released in January.

Una describes the process of writing A Crooked Tree as “uneven at best.” She wrote the first 30,000 words in 2016 but then spent a year away from the novel to focus on the new Writing & Literature course at IT Sligo. With the course starting in September 2017 and demanding all of her attention, she began to wonder if she would ever get back to writing her novel. Luckily, Una booked a writing retreat during the first break in the college year, which proved to be fruitful. She describes the retreat as “an immersive ten days doing nothing but writing, all day, every day.” In 2018 she spent every spare minute she had trying to write, and submitted the manuscript to an agent in January of 2019.

Regarding planning the plot, Una did not have a solid outline for the novel. Instead, Una had certain images and concepts she wanted to expand on. She was determined to write about dysfunctional family and sibling relationships and teenage friendships. In her own words: “I knew I was writing about a group of kids adrift in a world where the adults have let them down, when they are on the cusp of new knowledge and loss.” She places great emphasis on the opening scene of the book: “I had the opening scene in my head for a long time, a frustrated and harried mother puts her 12-year-old daughter out of the car, and drives off in the coming dark. The other siblings look back and know that something terrible will happen and somehow feel they must shoulder this responsibility.” She goes on to say that writing A Crooked Tree with specific scenes in mind rather than focusing on the plot led to a surprising development in the characters.

Motivation is something that even the most talented of writers struggle with from time to time. In Una’s case, she finds that deadlines help her to push forward with her writing. Having received a two book deal with Faber and Faber, Una found having a commitment to her agent and editor spurred her on to try finish her second book. Due to classes starting back up again and the effects of Covid-19, Una is unable to go on another writing retreat to work on her second book, meaning she’ll have to: “carve out some time to finish the manuscript.” Although she finds it hard to balance teaching students and writing, she also finds that teaching energises her and helps her to write.

As one can imagine, Covid-19 has affected the publishing and launch of A Crooked Tree.  Una had booked a flight for April 2020 to meet her U.S. Editor and do research for her second novel, but the trip had to be cancelled. A Crooked Tree was released in the U.S. on January 5th 2021. She was disappointed to not be able to have a book launch in Philadelphia to celebrate. A Crooked Tree was launched in the UK and Ireland on January 26th with Faber and Faber hosting an online event attended by Una’s friends, family, students, peers, and fans of her work.

Reception to A Crooked Tree has been positive; receiving a 3.9/5 rating on Goodreads. Sarah Gilmartin of The Irish Times described the novel as: “A colourful, classic coming of age tale full of quiet surprises and revelations.” A Crooked Tree was also recommended as one of the ‘Thrillers Spiked With Malice and Dread’ by Sarah Lyall of the New York Times.

As a writer, Una is preoccupied with how we lose things as time passes and how unaware we are of it, which is rather fitting given how drastically Covid-19 has affected everyone’s day to do lives. Una’s second novel will focus on: “trying to tell the story with alternating voices and different chronologies.” The book will be centered around a child being raised by her father after her mother disappears. In her own words: “There are slight echoes of the The Tempest. The father controls the narrative of the past and the girl tries to make sense of the memories that are fleeting and uncertain. It is, I suppose, about memory, how we remember and how we forget.”

As for advice for up-and-coming writers, Una sums it up in three words: “Write, write, write.” She discourages people from placing obstacles in the way or mysthologising the act of writing, which she says paralyses writers. She encourages people to submit their work to the many competitions and journals in Ireland, and that she herself got an agent by entering short story competitions. Una describes how many of her students in the Writing & Literature course at I.T. Sligo have won writing competitions and have had their works published. Being a part of a writing community is also recommended: “They (IT Sligo students) are engaging with other writers and each month the course collaborates with Sligo Central library and hosts The Word, an author series. Our students not only have been guests and do the open mic but they also have hosted the event, interviewing the guest authors. They are being part of a writing community and this is a great first step.”

Una Mannion’s debut novel A Crooked Tree was published by Harper Collins in the US and Faber and Faber in the UK and is available in all good bookshops.