Forensic-level investigations of a skeleton discovered in a cave in Co. Clare have shed fascinating new light on the life and death of a teenage boy who died in the 16th or 17th century.

A human skull (pictured below) discovered by cavers in a cave outside Ballyvaughan village in the Burren in 2011 prompted a rescue archaeological excavation funded by the National Monuments Service of the Department of Arts, Heritage, Regional, Rural and Gaeltacht Affairs. The full scientific investigations of the skeleton have just been published revealing incredible details about the boy’s life. 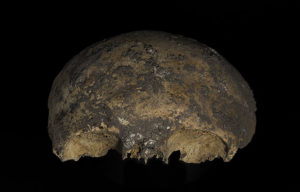 At the time of excavation, the small size of the skeleton led the team to think it was of a child. However, subsequent analysis of the teeth in particular revealed the remains belonged to someone who had died aged 14 to 16 years old. There was evidence of stunted growth, almost certainly a result of malnutrition and hunger. The adolescent measured 4 ft. 1 inch in height – the equivalent of an average eight-year-old child by modern standards, or an 11-12 year old by post-medieval standards. The stunted growth also meant that the sex of the individual could not be determined by normal archaeological methods.

Tooth samples were sent to two different laboratories for ancient DNA analysis and both confirmed the individual was a teenage boy. The DNA laboratories were at the University of Surrey in England and the Max Planck Institute for the Science of Human History in Germany.

Radiocarbon dating in Queen’s University Belfast revealed the teenager had died sometime between 1520 and 1670. Historian Dr. Ciarán Ó Murchadha has suggested that the most likely timeframe for the boy’s death is during the Commonwealth period (1649-1660), when Clare endured nearly two decades of famine, warfare, disease, and mass human casualty.

“This was a highly unusual situation: to find the remains of a malnourished boy in a small mountain cave in what was clearly not a Christian burial, yet he had died only a few hundred years ago,” said Dr Marion Dowd from IT Sligo, who was the director of the excavation.

“I was eager to get as many specialists as possible involved to try and extract more information about wh he was and how he had died.”

Osteoarchaeologist Dr Catriona McKenzie at the University of Exeter discovered evidence on the skeleton of chronic infections and vitamin deficiencies. He had sinusitis, which would have been caused by a respiratory infection. The bones also revealed evidence of a poor diet with little meat but high in carbohydrates – probably indicating the boy ate mostly bread and gruels. He had very poor dental hygiene.

Radiologist Dr Fran O’Keeffe examined x-rays of the leg bones and was able to determine that approximately once a year, every year, the boy suffered stresses that were so severe as to stop the skeleton from growing. When growth resumed, thin lines formed on the bones that could only be seen by x-ray. The type of stress he suffered is unclear, but it was probably a combination of starvation, nutritional deficiencies and poor health.

“All the evidence from the various specialists told us the same thing: this boy suffered periods of extreme hunger and malnourishment every year, probably for the entire duration of his short life” said Dr Dowd.

“We do not know who he was, but there are a few details we can be pretty certain about. Isotopic analysis by Dr Thomas Kador at University College London indicated the boy was local to the Burren. We can imagine he was born and reared close to Ballyvaughan village. He would have been a Gaelic Irish speaker and probably did not speak English. He would have been Catholic, and almost certainly came from an impoverished family.”

Ancient DNA analysis indicated he belonged to haplogroup J, which accounts for 10.7% of the modern population of Ireland. Less is known about his particular sub-haplogroup, J2b1b1, but it indicates a European maternal ancestry for the boy.

How the teenager came to be in the cave is a mystery. Neither the archaeological excavations nor the subsequent scientific studies could determine the cause of death.

Dr Dowd’s new book detailing the excavations and analyses has just been published by Archaeopress, Oxford: Archaeological excavations in Moneen Cave, the Burren, Co. Clare: insights into Bronze Age and post-medieval life in the west of Ireland.  It was launched in Hylands Hotel, Ballyvaughan on Friday.