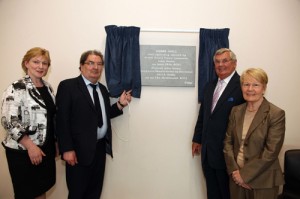 Nobel Peace Prize Laureate John Hume visited IT Sligo on Monday, June 13th to officially inaugurate a hall which has been named in his honour.

Speaking after the unveiling of a plaque at the hall, Mr Hume expressed his delight at having the facility name after him: “I’m very honoured that this fine new facility is to be called Hume Hall. I’m a strong believer that education and educational institutions should act as community connectors so it’s particularly fitting that this Hall is to be used by IT Sligo to host community events as well as Institute events.”

As Hume Hall is located in the Student Services Building, proposals were sought from the Students’ Union for a figure to name the hall after and the politician and peace process advocate was their choice.

The Student Services Building is home to services such as the careers and access offices, health and counselling services and the students’ union offices. Hume Hall is used for a variety of purposes including clubs and society events, examination and conferences such as the International CEO panel discussion on Global Prospects for Irish Talent held during Enterprise and Innovation Week in March.

President of IT Sligo, Professor Terri Scott welcomed John Hume and his wife Pat to the Institute; “We’re delighted that John could join us to officially inaugurate the new Hume Hall. John has always been a tireless advocator of education and civil rights and his contribution to Irish society and the North West region in particular 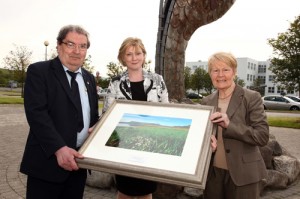 is quite simply, immeasurable.

“On behalf of all the staff and students at IT Sligo, I would like to thank John and Pat for visiting the Institute for the inauguration of the hall. Hume Hall is a wonderful facility for IT Sligo and for the wider community,” she said.

As Mr Hume’s visit fell on the same day as WB Yeats’ birthday, Professor Scott presented John with a framed photo of Benbulben with an inscription from one of Yeats’ poems, The Wanderings of Oisin.

Top:  IT Sligo President Prof. Terri Scott, John Hume, Chairman of the IT Sligo Governing Board Ray MacSharry & Pat Hume at the inauguration of Hume Hall in IT Sligo

Above: IT Sligo President, Prof. Terri Scott  presenting a gift to John Hume and his wife Pat Hume.