Research conducted this summer has shown that children are engaging in much less ‘free play’ that their parents would have enjoyed. 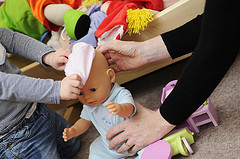 The research, which was conducted by IT Sligo and Early Childhood Ireland, involved interviews with almost 1,700 families and 240 communities across the island of Ireland about how children aged up to 15 are ‘playing’ within neighbourhood spaces including streets, greens, playgrounds, laneways and parks among others.

Some interesting findings arose from the data including very low levels of risk within current play patterns and low levels of engagement with nature during outdoor play.

The project was initiated as a collaborative action led by Doireann O’Connor from the Department of Social Sciences in IT Sligo and Marlene McCormack from the Knowledge Directorate of Early Childhood Ireland. Doireann and Marlene were supported in the research by IT Sligo Research Students Patricia MacLaughlin and Jonathan Angus.

The research has shown that children from disadvantaged communities are playing most and enjoying the most freedom within their play. The reverse is also the case with children from affluent backgrounds having more limited neighbourhood play opportunities and narrower windows of freedom within play while being much more likely to be heavily scheduled within structured and timetabled extracurricular activities. Children within middle class communities are spending much more time on homework than other children, they also spend the most time reading books and their parents are the most worried about them not having enough time to engage in play.

Children in medium sized towns fared worst in terms of outdoor play time with children in cities and rural areas enjoying significantly more time outdoors than their town based contemporaries. Within cities, however, children in urban apartments are faring worst of all with the least amount of outdoor play opportunities and time allotted to outdoor play. They also had the lowest instances of traditional play and play which their parents recognised as having engaged in when they were children.

The generational changes in play were a recurring theme within the findings with the vast majority of parents expressing that they had more freedom and more time outdoors than their children do. The parents were also more than twice as likely to have walked to school as their children are.

Indoor activities were shown to be highly prevalent in children’s lives with watching TV and playing with electronic equipment both featuring in the top three of all activities.

Gender differences were quite marked with more boys than girls engaging in outdoor play but girls much more likely to engage nature within their outdoor play. Boys are also engaging more with electronics than girls. Gender interactions were surprisingly low, with children in urban areas more likely to mix across gender lines.

Age difference analysis also presented interesting findings with creative and artistic activities as well as games that children invent themselves decreasing markedly after the age of eight. Engagement with electronics increases steadily with age.