IT Sligo participation in the recently awarded HNV-LINK H2020 project

Work of IT Sligo on High Nature Value farming is getting an important boost from a prestigious Horizon 2020 project called HNV-Link, which stands for High Nature Value Farming: Learning, Innovation and Knowledge. This is a 13-partner consortium, which grew out of the EIP Focus Group on HNV farming. With an overall budget of 2.2 M€, the project started in April 2016 and will last for three years. IT Sligo will work closely with the Irish partner Burrenbeo Trust.  The partnership is part of an international network focusing on innovations that support HNV farming systems and communities by simultaneously improving their “socio-economic viability” and “environmental efficiency”. A set of “learning areas” – including the Burren as well as many other iconic landscapes across Europe – will be used to evaluate innovation examples and innovation gaps, not only technical and commercial innovation but also social, institutional and policy innovation. There is also an ambitious dissemination plan for engaging farmer groups, researchers and other actors beyond the 10 learning areas.

The project will support grassroots activities (such as exchange visits), which are always highly demanded by practitioners on the ground. Among the major outputs is an atlas of innovations feasible within HNV farming areas. The project will also host an “Innovation Fair” to foster peer learning. Finally, HNV-Link will identify existing educational material and expose educators and students alike to HNV concepts, challenges and opportunities. The project’s website and other communication channels will be established by mid-2016. If you want to get an update and follow the project, you can contact the HNV-Link communication person – Irina Herzon (herzon@nullmappi.helsinki.fi) (in English) or a national contact person Dr. James Moran at IT Sligo moran.james@nullitsligo.ie or Burren contact point Brigid Barry trust@nullburrenbeo.com

University of Thessaly, Department of planning and regional development – Greece A new EPA funded project led by CERIS, Institute of Technology, Sligo targets the Prevention, Control and Eradication of Invasive Alien Species (IAS) on the Island of Ireland.  The research is important as IAS pose considerable problems for our unique ecosystems, human health, ecosystem services and for the Irish economy at an estimated cost of €262 million per annum. This three year project (2016-2019) has partners in Queens University, Belfast and INVAS Biosecurity.

There are four workpackages (WPs) in this project.

WP1: Systematic review and “horizon scan” of invasive alien species issues in Ireland. This will assess the species likely to arrive in Ireland, the impact these ‘door-knockers’ are likely to cause and relevant risk management actions.

Scanning the Horizon for Aliens!

IT Sligo hosted a two day Horizon Scanning workshop for invasive alien species in April 2017. This was an exercise where scientists and policy makers forecasted the most probable new invaders This two day workshop (19th and 20th April) was co-organised by the project team and the National Biodiversity Data Centre (NBDC), and co-funded by the EPA and the National Parks and Wildlife Service (NPWS).

‘We were assessing the likelihood of arrival and potential impacts of many damaging species that could arrive on the island of Ireland tomorrow!’, according to Eithne Davis, research student and her supervisor Frances Lucy. ‘This is a crucial step in preparation for their arrival, so that we can act swiftly to prevent ecological and economic damage, when they are detected.’ The Top 40 species most likely to arrive in freshwater, land and sea were identified at the workshop. It was attended by 45 experts from environmental agencies, academia and by practitioners from the Republic of Ireland, Northern Ireland and England.

The species list will be kept top secret until the busy scientists have submitted their documents to the competent agencies. IT Sligo has been the keystone in bringing experts throughout both jurisdictions and the UK together for the first time, to produce a list that will direct policy on invasive species management on this island. ‘Invasive species are not going to ‘do Brexit’, they have no respect for borders and we need to keep them in check’, according to Frances. 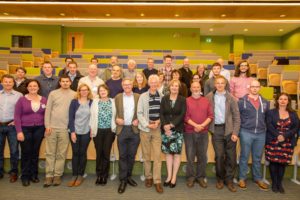 WP2: Biosecurity for Ireland will research and develop the objectives of (1) preventing the introduction of new IAS into Ireland (e.g. at ports) (2) reducing secondary spread of existing IAS in Ireland (e.g. inter-waterbody) and (3) dealing with localised introductions/outbreaks of IAS before establishment and spread (e.g. localised discovery of IAS followed by eradication).

WP3: Practical Control and Best Practice Guidelines for Two Invasive Species, Winter heliotrope and Asian Clam. For winter heliotrope control, we will determine the most effective herbicide/adjuvant combination and time of year for application; for Asian clam control, we will experiment with novel control/eradication measures (e.g. dry ice pellets). We will also produce best practice guidelines for the long-term control of these invasive species. Apply principles to other IAS of concern.

WP 4: Communications for Prevention, Control and Eradication of  IAS will provide efficient and effective stakeholder communication pathway protocols for preventing and managing introduction and spread of invasive species into and within Ireland. The WP will assess current biodiversity/invasive species databases, ‘apps’ and other relevant dissemination tools within Ireland, the EU and globally to meet the needs of early warning and rapid response. We will develop new information and training toolkits for effective communication of invasive species management. 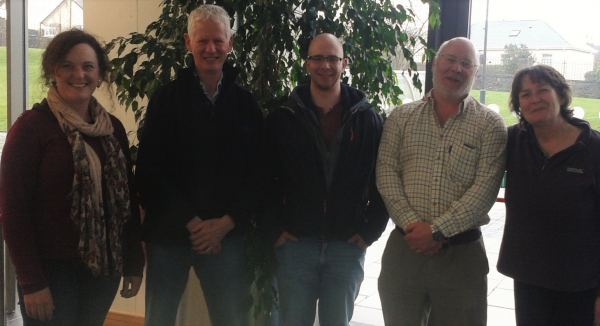 The project is funded by the EPA. The project partners are IT Sligo, Queen’s University Belfast and INVAS Biosecurity.