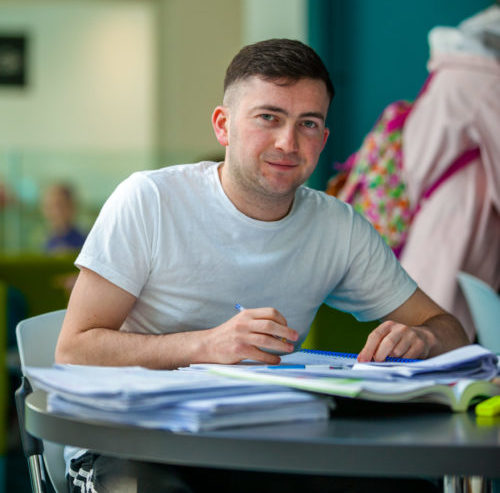 I’m 27 and I am from Longford. I decided to go back to college when I was 23 and I had always had an interest in Accounting from my school days. I completed a two year course with Accounting Technicians Ireland and from there I went straight into 2nd year of the honours degree in ATU Sligo.

What specifically about the course do you particularly enjoy:

We had a generally small class size, less than 20 people, which I found very helpful as it gave us a chance to ask lecturers to explain anything that was causing problems which wouldn’t be as possible in a larger class.

What is the best thing about your course that you think new applicants should know:

The lecturers are very helpful to students when they are seeking employment in their final year. They do everything possible to help which made it a lot easier to find a job which is the ultimate goal for everyone when they finish their degree.

If you were speaking with a first year student about to start your course, what advice/information would you give them:

I think I would tell them to try and get some experience over the summer after first & second year. I worked in an accounts office the summer after 2nd year and it has made it a lot easier to settle into my job now having the experience of being in an office environment and being familiar with excel and accounting software. Also, it will be an advantage when going for interviews in your final year that you can show your knowledge of working in an accounts office.

Can you suggest new ways we can promote your course, so we can attract new students to apply:

I think the best way for promotion now is through social media so the ATU Sligo Facebook page would be the best place to attract new students. Pictures & videos of the college itself would be helpful to let the students picture themselves there. And in regards to my course in particular I think promotion of the number of students who have gained employment well before the college year is over would be a great selling point, 8 out of 19 students had gained employment before the end of the semester.

If you are involved in Sport, volunteering, working or have other passions you pursue outside of your academic life, can you tell us about that.  Especially mention any Teams, Clubs or Awards.

In 2014 my friend and I set up a soccer team in our local area Moydow. As well as playing I have been secretary and treasurer since then. Our team competes in the Combined Counties Football League which includes clubs from Longford, Westmeath, Offaly & Laois. In 2017 we won a league & cup double. I also play Gaelic Football with my local club Ardagh/Moydow and I am a member of Longford tennis club.

What are your plans after ATU Sligo and any long term goals you are aiming for:

After leaving ATU Sligo I am starting work in KBG Accountants in Longford. My main goal is to become fully qualified and gain as much experience as I can over the next few years. Down the line it would be a goal of mine to have my own practice.

Find out more about Bachelor of Arts (Honours) in Accounting