Sligo Rovers has announced that Tubbercurry native Ciara Henry has agreed a long-term deal at Sligo Rovers through a scholarship with Atlantic Technological University.  Henry becomes the second Women’s Senior Team player to join the newly formed University who teamed up with Sligo Rovers to sign the attacker.

Each year, the University offers a limited number of Sligo Rovers players a fee-waiver scholarship which is matched by the club with support to the player throughout the seasons they are studying. Following the establishment of the Senior Women’s team at Sligo Rovers in September 2021, this is the first year the university will offer scholarships to both Senior Women’s and Senior Men’s players.

Ciara joined the Club’s Academy in 2018 and has become and important part of Steve Feeney’s Senior squad throughout this season.

ATU is one of Ireland’s largest multi-campus universities with campuses across Sligo, Donegal, Mayo and Galway. The new university is built on the foundations of over 50 years in higher education and offers academic excellence and the opportunity to participate in sport at a national level.

Henry completed her Leaving Certificate in June at St. Attracta’s Tubbercurry and will commence studying an honours degree in Health Science and Physical Activity at ATU Sligo as part of the club’s long-standing partnership with Atlantic TU.

‘’Ciara has played with the underage teams at the club for the last few seasons where she impressed on numerous occasions. Ciara has shown a great attitude since joining the senior team this year, she has impressed in her appearances this season while also showing a great appetite to improve her game and learn from the players and coaches around her each week in training.

‘’It’s fantastic that Ciara now has the opportunity to apply that same appetite to learning to her course at ATU while pushing forward with her football career at Sligo Rovers. We are excited to see Ciara’s progress both on and off the pitch in the coming years’’. 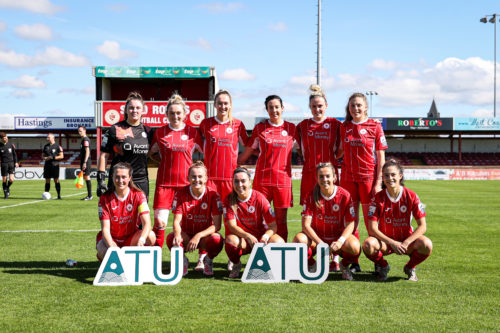 Henry will now be part of ATU Sligo’s Senior Women’s team who will compete in the Third Level Colleges League and Cups throughout the academic year, which starts in the coming weeks.

“It is fantastic to support talented young people seeking to fulfil their academic and sporting ambitions within our region. The ATU partnership with Sligo Rovers has helped to attract students dedicated to playing at elite level, while gaining a University degree. At ATU we continue to invest and develop scholarship programmes that meet the needs of our student population, their families and our wider University community. We wish Ciara every success in her future here at ATU and on the pitch with Sligo Rovers”

FAI football facilitator at ATU Sligo, Colm Jinks, is delighted with the new addition to the Women’s Soccer club at the university:

‘’The partnership works for everyone – It is great to have a player of Ciara’s ability here with us, not only at ATU Sligo but to continue their development at Sligo Rovers.

‘’The Senior Women’s team have done so well this year in their first ever season competing in The Women’s National League and Ciara has been a big part of that having come through the academy.

‘’This shows that young girls coming through the club’s academy system will be given an opportunity at senior level and may also enhance their skills by gaining an excellent education at ATU Sligo’’.