What will the pilots be doing?
The RED WoLF project will increase renewables’ usage and reduce carbon emissions for homes with photovoltaic solar panels that do not have gas. Six pilots in UK, Ireland and France will fit houses with hybrid storage systems merging batteries and storage heaters. The heaters will provide heat on demand and the batteries will store output from the solar panels as well as low-carbon energy (wind/solar) drawn from the national grid at times of low demand using new ‘smart’ technology through which the houses hybrid storage systems will be able to communicate with the grid. This will remove the mismatch between generation and usage.

What is the innovation?
Although solar panels, batteries and thermal storage currently exist, they are not systematically combined in homes. Storage will become affordable by combining batteries with a cheap heat storage technology. This will in turn enable homes with solar panels to use their energy locally, as well as to store grid electricity when nobody wants it. Negotiations with utilities will be aimed at achieving a reduced tariff for this service.

A home control system automatically makes decisions on storage based on local energy usage, the price of electricity, weather forecasts and the grid’s current CO2 intensity.

What is the generation usage mismatch?
One the one hand, there are times when a proportion of available renewable energy is wasted – it is being generated but no one uses it. On the other hand, there are certain times of day where energy demand is highest – from approximately 6 AM to 9 AM (when people are getting up and having breakfast) and from 4 PM to 8 PM (when they are home and getting the dinner on). At these times, demand is too high to rely on renewables alone so inefficient, carbon-intensive ”load-following” power plants are turned on to meet the demand.

What will be achieved?
Across the six pilot sites in UK, Ireland and France, there will be 100 houses which will reduce carbon emissions from their energy use by 215 tonnes/year. By the end of the project in 2022, the smart hybrid storage systems will be market-ready and prepared to be installed into NWE homes.

Officially approved in January 2019, the project will end in July 2022.

The total project budget is €6.06 million. 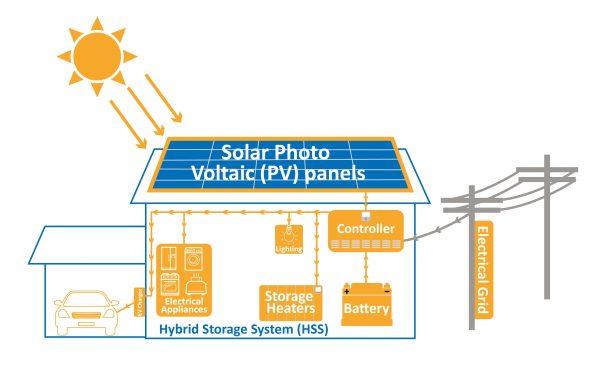