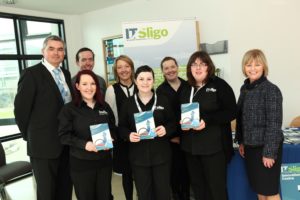 A new and exciting €100,000 European Union Fund for creative industries will be launched at Enterprise & Innovation Week’s flagship event which takes place in the Knocknarea Arena tomorrow (Thursday, March 22nd) from 1pm to 4pm.

The new fund for the creative industry is part of a new business support programme called 4CNW (Creative Challenge Celtic Crescent North West). 4CNW is a new business innovation support programme, delivered by The Creative State North West. It aims to encourage knowledge exchange and collaboration between the creative industries and other industries in the areas of Life Sciences, Tourism, Technology and Agri-food

The initiative is the result of a successful collaboration between Sligo County Council and the Western Development Commission who, together with local authority partners from Donegal, Leitrim, Mayo and Roscommon, entered a successful bid to the European Commission’s Directorate-General for Enterprise and Industry.

The North West will be the only Irish region to benefit from this innovative funding programme courtesy of the newly established European Creative Industries Alliance (ECIA).

The event will feature the first official screening of a new 12 minute short film based on a Seamus Heaney poem and shot by local film maker Johnny Grogan.

The event will also be streamed live by Liveview.ie on the IT Sligo website at https://www.itsligo.ie/livestream/innovationweek.htm

Don’t miss it! If you can’t come along, be sure to tune in to the live stream.

Image Caption: Some of the organising team behind Enterprise & Innovation Week preparing for tomorrow’s flagship event.