A business based in the Innovation Centre at IT Sligo, Epona Biotech, has fought off stiff competition to be named the Best Emerging Company in the 2010 All-island Seedcorn Business Competition.

More than 200 companies from all over the island of Ireland competed in the prestigious competition, which recognises companies in the early stage of development. Companies are selected following an intense competition designed to mirror a real life investment process.

Epona Biotech was founded by Sligo native, Dr Heinrich Anhold, in 2008 and the company is developing a breakthrough, hand-held blood analyser than can deliver instant blood analysis at a horse’s side.

Heinrich conceived the concept for the device with a wealth of experience in the equine industry from his upbringing on his parents Horse Holiday Farm in Grange, Co Sligo, and from his own experience in international show jumping.

Having completing a PhD in Biochemistry, he then set about developing the business idea and was grateful for the practical supports offered to him from an early stage at the Innovation Centre; first in the form of the ‘Hotdesk’ facility, which provides office space for emerging businesses; and secondly from the CEIM Enterprise Platform Programme, a one-year full-time professional training and enterprise support programme aimed at the needs of entrepreneurs in a business start-up situation. The programme is jointly delivered by IT Sligo and LYIT and was the first of its kind to be undertaken by Institutes of Technology in Ireland.

Heinrich said the supports provided by the Innovation Centre during the embryonic stage of Epona Biotech were valuable, and recommended anyone with an interest in developing a business idea to investigate the options available at the Centre.

“I started with a base in the Hotdesk area and it was great because it provided me with the space to think and work, without the costs involved in renting an office space.

“From there I was successful in securing a place on the CEIM Programme. Through CEIM I met a lot of like minded people who were going through the same process and experiencing the same difficulties as me, and it was a real help. The year on the Programme culminated in a trade mission to Silicon Valley, which was a great eye opener for me.

“The best support provided by the Innovation Centre, however, is through the people who work there, particularly the Centre Manager Janette Gillen, who is its best resource. Janette has a talent for working with start ups. She gets excited by an entrepreneur walking into her office with a raw idea and an unpolished pitch. Most people don’t recognise that early stage potential. Working with people like Janette who are passionate about what you are doing helps generate that crucial momentum you need to get off the ground.”

Through the Innovation Centre, Heinrich was also able to avail of the opportunity to design a rapid prototype of the portable blood analyser, which helped him seek feedback from prospective customers on the design.

The award under the All-island Seedcorn Business Competition has secured Epona Biotech a €50,000 cash prize, but the real value is in the credibility attached to the win, says Heinrich; “It gives us great recognition and credibility. We are only at start up stage at this point and we plan to launch the product in 2012. The equine market is an excellent platform for entering the animal healthcare market. It’s a niche market, high value, highly specialised and it’s a competitive industry; so if you can come up with a product in the equine health industry, you can gain rapid market penetration.”

Congratulating Epona Biotech on its win, Innovation Centre Manager, Janette Gillen, said: “I not only congratulate Heinrich on this success, but I also congratulate him for having made that critical decision to start his business in the first instance. Starting a business is not a career change, but a lifestyle change.

“Businesses like Epona Biotech are predicted to be the most significant engine of economic and employment growth in the Irish economy over the next decade, and people like Heinrich are turning that prediction into a reality. It is very encouraging to see due recognition being awarded in this way.” 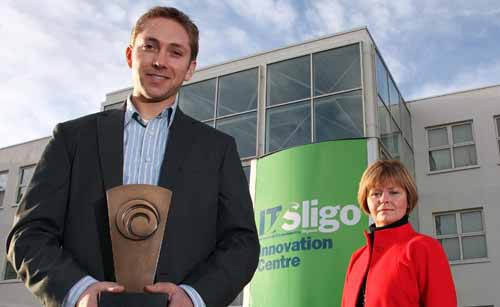