A male condom is a narrow tube, made from very thin, natural latex rubber which is soft and stretchy. It fits over a man’s erect penis and must be put on before the penis enters the vagina. Condoms prevent the man’s sperm meeting the woman’s egg. Male Condoms are more accurate than female condoms as they are 99% effective. Couples can use male condoms to prevent S.T.I’s as well as pregnancy. Click the following link for  a demonstration on how to put on a condom: ThinkContraception. 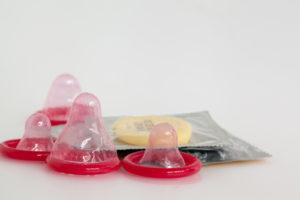 Disadvantages of the male condom

For more information on male condoms or any other contraceptive method, click on any of the link below;

A female condom is a tube made of very thin polyurethane plastic or rubber. The only female condom currently available is ‘Femidom’. It is closed at one end, and designed to form a loose lining to a woman’s vagina with two flexible rings, one at each end. They are found to be 98% effective IF they are used carefully.
The female condom is a barrier that prevents against S.T.Is as well as pregnancy.

Benefits of the Female Condom

Disadvantages of choosing the Female condom

For more information on female condoms or any other contraceptive method, click on any of the link below;