Often eating disorders are blamed on the pressure society puts on people to be thin. However, the evidence suggests it is more complex. Some biological factors combined with influential factors and experiences can build an unhealthy set of reasons that provoke the disorder, and other factors then contribute to the condition continuing (HSE, 2016).

How common are eating disorders 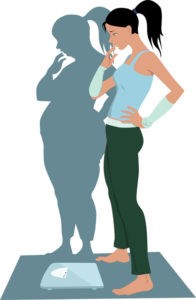 Anorexia Nervosa is an eating disorder characterised as the refusal to eat enough to maintain a healthy body weight.

Symptoms of Anorexia Nervosa include;

Medical Complications that can develop;

Bulimia Nervosa involves eating unusually large amounts of food and feeling a lack of control during these episodes. Binge eating is followed by forced vomiting, or excessive use of laxatives, excessive fasting or excessive exercise or a combination of all these behaviours.
Bulimia nervosa is different to anorexia nervosa in that those with bulimia nervosa often keep a healthy body weight.
Similar to Anorexia Nervosa, individuals with  Bulimia Nervorsa fear gaining weight, wish to lose weight and are consistently unhappy with their body shape.
Usually, bulimic activities are done in secret as the person may experience feelings of shame about what they do.

How often do these episodes happen?

Where can I get support

If you feel that you may have an Eating Disorder, the Student Health team can provide you with the necessary advice and treatment to help in your recovery.

Other useful links and resources