Welcome to the
Faculty of Science

Welcome to the Faculty of Science at ATU Sligo. Are you interested in understanding more about the world around us and have an impact on improving mankind? If so, science could be for you. Science programmes are practical based involving a wide range of laboratory experiments and field work using specialist equipment backed up with science theory, research and innovation.

91% of our graduates are employed or in further study four months after graduation.

We offer students a chance to secure work placement, with the majority of Level 8 students leaving with a placement.

Many of our lecturers are educated to doctorate level and have years of experience within industry.

Within this Faculty, we have three departments

Why choose Faculty of Science at ATU Sligo?

With over 1,100 students across our science programmes, our Faculty of Science is one of the largest science schools outside Dublin and the central hub for innovation at the college.  We provide cutting-edge technologies, state-of-the-art laboratories, and work closely within industry to bring the latest research and developements into our programmes.  We focus on hands-on skills, work experience and competencies that employers are seeking so that our graduates are career-ready on their first day of work.  All our programmes are accredited by various bodies such as Science Foundation Ireland, meaning students are getting the best, industry-led education. We offer an excellent learning environment in our recently refurbished science building with field trips, site visits and interactive modules.

Each course is regularly updated to ensure that our students meet the highest level of academic standards and training sought by employers on both a national and international scale.

We keep our class numbers to a minimum; this ensures students have the opportunity to engage with their lectuer and fellow classmates.

From Level 6 Higher Certificate awards to Level 10 PhD Doctorate awards, uur students have the option of taking up further or parallel study options with our online learning options. 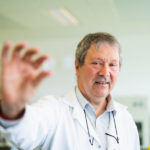 Dr Jeremy Bird first came to ATU Sligo (formerly IT Sligo) in 1995 as a Lecturer and progressed to a  senior lecturer post in 2006.  He became Head of the Science Faculty in 2009.

He was previously employed at the  University of Reading as research assistant for the Cancer Research Campaign, at the Experimental Embryology and Teratology Unit of the Medical Research Council (UK), as a research scientific officer at the University Hospital of Wales (Human Genetics Unit and Child Health), as a Human in vitro fertilization Embryologist at the Hallam Medical Centre, London, as a  research officer at the Department of Microbiology NUI Galway and at the  National Diagnostic Centre in NUI Galway as a postdoctoral research scientist.

Prior to ATU Sligo, he was employed as a Lecturer in Institute of Technology Tallaght (now TU Dublin).

Jeremy has researched for and contributed to numerous scientific books and journals over the last 30 years.

Read more about his research.