ENTREPRENEUR Eleanor McEvoy addressed an event called ‘Female Entrepreneurship – Leading the Field’ during Enterprise & Innovation Week. Founder of Phonecard Warehouse, Ms McEvoy she is now poised to be part of a movement that could see the way energy is sold transformed.

She has formed a new company called Budget Energy and has acquired a licence to sell electricity in Northern Ireland. Come April, she expects to be offering pre-paid electricity to the Northern Ireland market.
Ms McEvoy established Phonecard Warehouse in 1999 and sold it in 2006 when it was making €50 million in profits a year. The company was responsible for self service vending machines that deliver top-up codes for prepaid mobile phones and also international calling cards, ring tones and mobile games. They became a very common sight in shops around the country with the increase in popularity of mobile phones.
The business idea behind the Phonecard Warehouse was a simple but effective one that developed from her previous food vending machine business Pembroke Distributors, through which she operated food and drink vending machines.
Similarly, the concept behind Budget Energy was inspired by a previous business model. If you can pre pay for phone credit, why not pre pay for electricity?
“Now more than ever with the economic difficulties people are facing, no one likes being landed with an electricity bill that they haven’t budgeted properly for,” she explained.
“13,000 people had their electricity cut off in Ireland in the last year, so that in itself is a strong indicator of the difficulties people are having in meeting their energy bills. While in Northern Ireland, no one has had their electricity supply cut off in 10 years. They come to your home and install a metre and you pay for your energy needs in advance.”

With more than 250,000 households in Northern Ireland fitted with electricity meters, there is huge potential for McEvoy’s new company, Budget Energy when the market is open to competition in April. Ms McEvoy shared her down to earth approach to business at the IT Sligo event; “Entrepreneurship for women or men is straight forward; it is about spotting an opportunity and turning it into a profitable business. Stop thinking that being an entrepreneur is something that is special, or a mystery. If you really want to be an entrepreneur, you need to stop talking about it and just do it.” 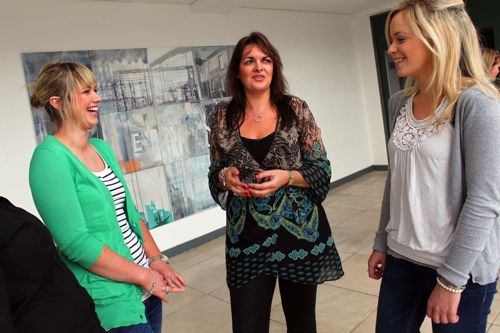