Entrepreneurs attending a function to mark the end of the CEIM Enterprise Platform Programme were inspired by the story of Sligo-born business man George Mullan whose company, Support in Sport (SIS) , had a turnover in excess of  €30 million this year, and is based in Strandhill, Sligo. 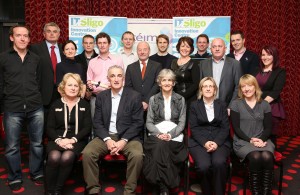 The event in Sligo’s Glasshouse Hotel celebrated the success of the Enterprise Ireland-funded CEIM programme which was offered jointly by IT Sligo and LYIT from 2004 until earlier this year. It has now been replaced by the New Frontiers programme.

George Mullan’s company Support in Sport produces and lays both natural and artificial pitches for leading football clubs around the world, including Premier League champions Manchester City, Italian champions Juventus. SIS pitches are on show at the new national stadium in Sweden and at events such as the IRB Six Nations, the World Cup and the African Cup of Nations.

His advice to the entrepreneurs was concise; “For me, business is incredibly simple,” he said. “It’s about finding your customer, talking to them and making some sales.”  The son of a cattle dealer from Strandhill Road, he spent the early part of his career working with multinational company Wyeth, before embarking a career change – running his own business.

“Don’t be afraid to make mistakes, but try not to repeat them,” he said. The dedicated Sligo Rovers fan who employs 80 people full-time in Ireland, Britain, the Netherlands, Turkey, Angola, eastern Europe and the Middle East said that 65 per cent of his company’s business is repeat custom which underpins his mantra the ‘customer is king’.

Head of Innovation at IT Sligo Niall McEvoy said the CEIM Programme has provided an invaluable boost to entrepreneurial activity in the North West; “CEIM has 60 alumni businesses which now employ 250 people and have a combined with turnover in excess of €12m.  Moreover each new CEIM generated business is firmly rooted within the region.”

The programme has now been replaced by New Frontiers which is also run jointly by IT Sligo and LYIT and is funded by Enterprise Ireland. Applications for the next entry to the Programme are currently being invited and the deadline is January 4th.