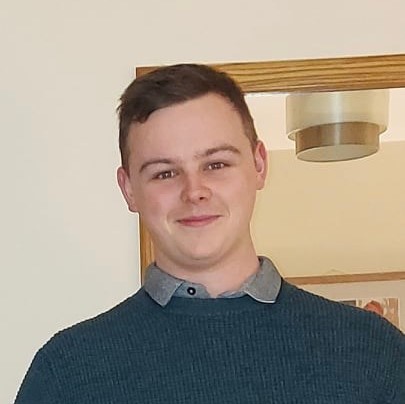 Fearghus is a PhD student based within the Engineering department at I.T. Sligo. He began his academic studies in NUI Galway where he completed a BSc (Hons) in Physics with Theoretical Physics (2015 – 2019). He spent semester 2 of his third year in Hong Kong University of Science and Technology. His final year project was on the mathematical modelling of traffic flow systems.

He started his PhD in November (2020) and expects to finish in (2024). The PhD is funded by a CUA Bursary and is supervised by Dr Leo Creedon, Dr Marion McAfee and Dr Edna Curley. Fearghus’s research will create a mathematical model describing the Gene-Hormone interactions which occur within a cow. Using this model events in a cow’s oestrus cycle will be more accurately predicted. For example, the optimum time for AI may be estimated and undesirable events such as twining and missed heats can be avoided.

The techniques used will include systems of ordinary differential equations, linear algebra, and networks/graphs. Existing models will be improved, and new models will be developed and studied, based on data produced by the Polish Academy of Sciences. The model will be created using Symbiology in MatLab.

Fearghus has a role at the Maths Support centre at I.T. Sligo where he tutors undergraduate students under the guidance of Kevin Bohan and helps them with any difficulties they have during their mathematical studies. He also works as part of the Access programme at St Angela’s College where he lectures the Access Maths course online.

As part of his project Fearghus has presented at the Irish Mathematical Society’s annual meeting which this year took place virtually and also attended the Dynamical Systems Applied to Biology and Natural Science conference.