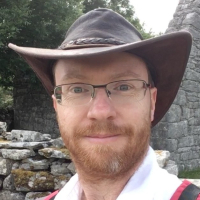 I am an archaeological geophysicist working in both the academic and private commercial sectors. I have specialisms in the use of legacy data; 4D time-lapse assessments; the application of electromagnetic induction for the assessment of archaeological sites within challenging environments and variable geological backgrounds; induced polarisation, upland archaeology; conflict archaeology and archaeological deposits threatened by coastal erosion.

I developed an interest in archaeological geophysics during my BA (King Alfreds College, 2000) and specialised in the world of geophysics with my MSc in Archaeological Prospection (University of Bradford, 2001). I worked for a small number of private sector archaeological and geophysical companies in the UK before moving to Ireland and creating Earthsound Archaeological Geophysics. Between 2010-2014, I carried out PhD research funded by a National Roads Authority Fellowship Programme A reappraisal of archaeological geophysical surveys on Irish road corridors 2001-2010 (University of Bradford, 2014), which resulted in a number of peer review publications and a procedural guidance document for the NRA (now TII, Transport Infrastructure Ireland) staff on commissioning and procuring of geophysical surveys on infrastructure projects.

I was a director of Earthsound Archaeological Geophysics (2002-2019), the largest private sector company in Ireland dedicated to the investigation of archaeological remains using geophysical techniques. I maintained a high academic profile for the company with a healthy publication record and as an Industrial Partner for PhD research and partner for a variety of academic research and community archaeology projects.

Since 2008 I have acted as a consultant to the Serious Crime Review Team (a cold case investigation unit) of An Garda Siochána and regularly provide them with forensic geophysical surveys and advice.

I Lecture in the Department of Environmental Sciences, Institute of Technology Sligo, Ireland, where Im responsible for delivering 5 modules in Applied Archaeology at Level 6 (Higher Certificate), Level 7 (BSc degree) and Level 8 (BSc Honours degree), and supervising postgraduate research. I teach modules in both practical and theoretical Archaeological Geophysics, GIS and Geoarchaeology. I'm a member of the Centre for Environmental Research Innovation and Sustainability (CERIS) research cluster at IT Sligo. I'm currently supervising a PhD candidate assessing Napoleonic-era Signal Defensible Guardhouses in Connacht and Ulster. I'm a geophysicist for the ERC-funded Lost Frontiers Project, collecting geophysical data and sediments to map palaeolandscapes beneath the Irish Sea.