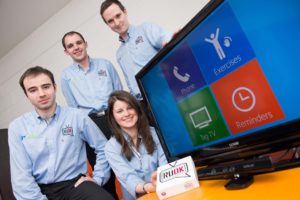 The students– Team RUOK – were crowned winners of the Irish finals of the Microsoft Imagine Cup 2013 in February, with their innovative solution to support the physical and social needs of older people in their homes through technology.

Now in its eleventh year, Imagine Cup is a global, yearlong competition that culminates in a Worldwide Finals event. Over the past 10 years, more than 1.65 million students from more than 190 countries have participated in the Imagine Cup.Worldwide Finalists will also have the chance to apply for Microsoft Imagine Cup Grants as part of a three-year, $3 million investment by Microsoft to help students turn their ideas into reality.

Team RUOK has created a system which assists in the medical, physical and social care of older people and the infirmed. The system extends a ubiquitous device, the television, to provide new means of communication and interaction not readily available to older people and the house-bound.  RUOK widens the functionality of television deploying technologies such as Microsoft Kinect, Windows Phone and Azure.

Cathriona Hallahan, Managing Director of Microsoft Ireland speaking today said: “Microsoft is excited for Team RUOK as they embrace this opportunity to again fly the Irish flag with pride at the global Imagine Cup finals.  Irish students have had a great track record in the Imagine Cup finals, with the 2011 IT Sligo team winning the overall global competition in New York and last year’s team securing a place in the top 20 out of 106 competitors in the final. So this year we wish the students the very best, and know they have  an excellent chance of bringing home a prize.  With the evolution of Imagine Cup, we’re inspiring students from all academic backgrounds to realize the potential of technology to impact their local communities, and in doing so the world. “

Team ROUK member, Linzi Ryan from Crumlin, Dublin is a postgraduate research student at IT Sligo. She commented, “The world’s population is ageing rapidly and the aim of our project is to help reduce the loneliness that can be felt by older people and the house-bound. Using a technology that they are already familiar and comfortable with, the television, we have developed a new method of communication and interaction that connects them with friends and family.”

This is the third time an IT Sligo team has represented Ireland at the Microsoft Imagine Cup world finals and, in 2011, the Institute’s Team HERMES was the first team from Ireland to win the competition. Team RUOK is a multidisciplinary team; Killian Mc Cormack (Sligo) and Gabriel Cioflica (Romania) are studying Software Development, Linzi Ryan (Dublin) is a postgraduate research student in product and service development and Damien Fee (Fermanagh) is studying Creative Design.

Team Mentor, computing lecturer Padraig Harte said, “Our success record demonstrates the quality of graduates the IT Sligo is producing; “Our students have proven time and time again that they can compete successfully on the world stage. The secret to their success is the practical and relevant nature of our programmes and how effectively they prepare students to put theory into practice.”

This is the seventh year that Ireland has competed in the Imagine Cup. The Microsoft Imagine Cup is the world’s premier student technology competition. It provides an opportunity for student technologists, developers, and aspiring entrepreneurs from all academic backgrounds to collaborate, develop a technology application, create a business plan and gain a keen understanding of what they need to bring their concept to market.

Pictured from left to right above are Team RUOK: Gabriel Cioflica (Romania), Damien Fee (Fermanagh), Killian Mc Cormack (Sligo) and Linzi Ryan (Dublin) – the IT Sligo team that will represent Ireland at the global finals of the Microsoft Imagine Cup in St Petersburg next week. Photo by Sean Mullery.