Microsoft Ireland has announced that students from IT Sligo will represent Ireland at the global finals of Microsoft’s Imagine Cup 2011, the company’s global student technology competition, with their project HERMES.

Now in its ninth year, Imagine Cup challenges students to ‘Imagine a world where technology helps solve the toughest problems facing us today’. As winners of the Irish finals, IT Sligo will travel to New York this summer to compete against students from all over the world at the global finals of the Microsoft Imagine Cup 2011. IT Sligo competed today in the finals against ten other teams at Microsoft Ireland.

HERMES is an interdisciplinary venture from IT Sligo bringing innovative ideas from the School of Engineering and the School of Business. It has a key goal of initially targeting “the most at risk” drivers to increase road safety and thereby tackle what the World Health Organisation predict will be the 5th leading cause of death by 2030. With this goal in mind the team came up with a unique idea that will change the way in which road and human factors are associated with fatal/serious vehicle road traffic collisions.

The team researched the statistics reported on road safety and found that the data was lacking real time analysis for any given accident. The team have developed an in car road system that communicates data from the device in the car to a mobile phone, which will then be uploaded to the cloud thereby acting as an early warning system on erratic driving behavior.

Speaking at the awards ceremony Pat Meegan, Microsoft Ireland said: “Participating in a major educational competition such as the Imagine Cup, inspires students who are working at the cutting edge of new technologies. In this fast moving world, students need to know how to learn new skills as quickly as technology creates new challenges.”

“The Imagine Cup inspires creativity and ingenuity in the use of technology. Team HERMES have exhibited all these qualities and are worthy winners of the national stage of the competition. I know that projects from all of the finalists showed outstanding creativity and ingenuity and I have every confidence that HERMES will go forward and do Ireland proud in the global finals. It’s encouraging for us to see so many bright minds still coming up with such clever and innovative ideas at Imagine Cup. It’s a positive sign for the future and whether you are a winner or a runner up today I hope you’ll continue to foster your creativity in your future careers.”

This is the fifth year that Ireland has competed in the Microsoft Imagine Cup competition. This year the competition has attracted over 600 entries from Universities, third level colleges and Institutes of Technology across the country from both north and south of the border.

James McNamara, from the winning team HERMES said, “We’re delighted to have been chosen from amongst our peers to represent Ireland in such a prestigious competition. We look forward to representing IT Sligo, our fellow students and our country in New York this summer and we are grateful to Microsoft for the opportunity.”

“We are very proud to support Microsoft’s Imagine Cup,” said John Leech, eCommerce Director, EMEA at Lenovo International. “It truly represents the next generation of technology and business leaders, and will allow Irish students to showcase their talent, ability and prowess on a global stage. One of the elements that makes this competition so attractive is the fact that the focus is on developing innovative solutions for the real world. We wish the winning team today the very best of luck in New York this summer at the global Imagine Cup finals.”

IT Sligo will receive mentoring from Microsoft Ireland in the build up to the global finals this year in New York. They will also receive a Touch enabled Device from Lenovo as well as Windows phone 7 from Microsoft to help build out their solution.

Further information on the Microsoft Imagine Cup can be seen on www.imaginecup.com. 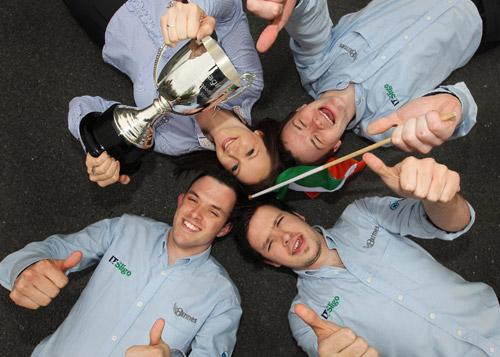