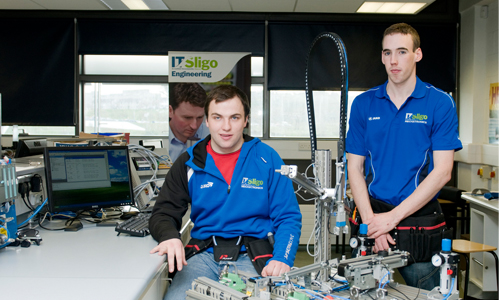 Pictured from left to right are Winners of the Mechatronics National Skills Finals, IT Sligo students Shaun Henry Gillespie from Ballybofey in Co Donegal and Colm Frizzel from Ballymote in Co Sligo.

IT Sligo students were placed first in two categories at the 2011 National Skills Competition which were held in Cork.

The National Skills Competition was held in Cork Institute of Technology from April 5th to 8th, and entrants took part from all over the country.

IT Sligo has an excellent record at the national competition, which is now in its 54th year. More than 50 per cent of finalists and winners in the competition in the last 11 years have been IT Sligo students.

Head of School of Engineering, Frank Carter, said that the competition is a very important standard setting exercise; “To qualify for National Skills, competitors have had to win their local round of National Skills, so they really are the best in their field in the country. The competition sets the standard for excellence in workmanship in the different skills and it helps the country as a whole to maintain the high standard for which we are known internationally.”

“For the mechatronic students, it provides students with the expertise to design and build the robotic production machines so crucially important in automating the manufacturing processes in the medical device, pharmaceutical and food sectors, keeping these industries competitive.”

“IT Sligo has a very strong record in the competition, thanks to the dedication and level of expertise amongst our lecturing staff,” he said.
Winners from the National Skills Competition will be selected to represent Ireland in the World Skills Competition which will be held in London in October.

IT Sligo lecturer John Joe O’Reilly is a Chief Expert for the Joinery section of the Competition. 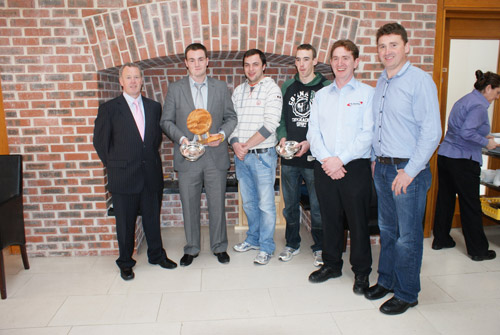 IT Sligo students who took home gold at the National Skills Finals pictured with lecturers John Joe O’Reilly and John Hession. Pictured from left to right at CIT in Cork where the finals were hosted are; IT Sligo lecturer John Joe O’Reilly; Alan O’Reilly (Joinery); Shaun Gillespie and Colm Frizzel; (Mechatronics); Shane Loughlin, Judge in the Mechatronics Final; and IT Sligo lecturer John Hession.