Home » IT Sligo Students Step Out in Style

IT Sligo Students Step Out in Style

IT Sligo students stepped out in style to finish among the prize winners in a national student walking challenge.

Marchathon 2014 was organised by the National Transport Authority in conjunction with with the Smarter Travel Campus programme as a way to encourage more students to travel on foot.  Thirteen third level colleges took part.

To complete the Marchathon Challenge, students had to walk in groups of three for 30 minutes on five successive days.

IT Sligo won the overall prize for the “Best On-Campus Implementers’ Award” and other prizes including the “Marchathon Story Competition”, which was won by Public Health and Health Promotion Student, Edel Hardiman. Edel is from near Moyne, Ballaghaderreen, Co Roscommon.

She said: “They made a huge effort to promote the Marchathon both on campus and through social media by organising a series of events such as three-legged walks, wear your county colours walking, bring a lecturer for a walk, bring a friend for a walk, dress up and go walking day, walking in the rain in swimwear and even a yo-yo walking competition throughout the week.

“Their hard work really paid off and made the Marchathon a lot more interesting for everyone taking part.”

Congratulating all those who took part, Sharon said she was delighted with the success of the inaugural challenge event.

“We had entries from third level campuses all over Ireland. By ditching their car and making the healthy choice to walk, participants covered over 13,125 kms on foot and reported back that they were feeling fit and good about themselves!”

Yvonne Roache said the Marchathon matched the ideals of the Institute’s Healthy Campus initiative which is based on physical activity, health and nutrition, emotional health and campus environment.

“The Marchathon was all part of our long term vision to create a campus culture which nurtures the health and wellbeing of all our staff, students and the wider campus community,” explained Yvonne, who is the Healthy Campus team co-ordinator.

“We wanted to get across the idea that being healthy needn’t be a chore but something that can be enjoyable and sociable. Initiatives like Healthy Campus will help people change their habits.”

Since February, IT Sligo has been hosting a series of Healthy Campus events, with students on degree courses such as the BB in Recreation and Leisure and BSc in Health Science and Physiology assisting in organising them as an integral part of their course. this allows students to see the practical application of what they learn in class, Yvonne said.

“IT Sligo already has the practical and teaching expertise readily available on campus and the Marchathon,which we hope will become an annual event, will help us to be a step ahead in fostering  health promotion for both staff and students.”

Edel Hardiman, who captained an IT Sligo Health Scientists team of walkers in the challenge, said she thoroughly enjoyed taking part.

“We walked to and from college, and to and from lectures every day. On top of doing all that, we even managed to convince one of our lecturers to bring the whole class for a walk on our Sli Na Slainte route around the campus. Everyone, including our lecturer, really enjoyed it and we’re now talking about doing a walk on a regular basis during our breaks between classes. 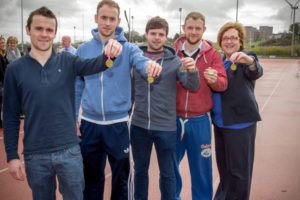 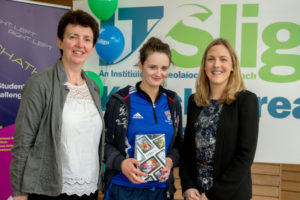