The event was the first of its kind to be held in Canada by Irish Institutions. It was organised to mark the achievements of the graduates over the past two years during which the experience of studying in Ireland was severely curtailed by the impact of the COVID pandemic.

The keynote address was made by Ms Linda Franklin, CEO and President of Colleges Ontario, who remarked on the resilience of the students who successfully completed their studies despite the challenges of various shutdowns and the pivot to online learning.

Virtual addresses were also made by Ambassador of Ireland to Canada, his Excellency Dr Eamonn McKee, President of IT Carlow Dr Patricia Mulcahy, Head of Sligo College Dr Brendan McCormack and the President of MTU, Dr Maggie Cusack. All the presidents congratulated and complimented the graduates on their accomplishments in the face of such adversity. 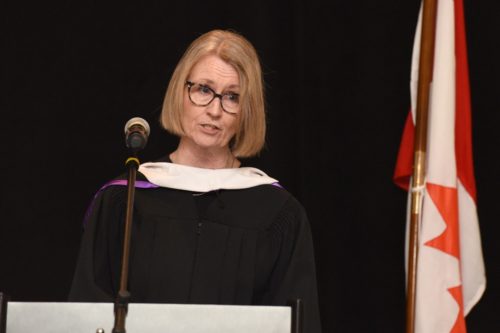 Keynote address by Ms. Linda Franklin, CEO and President of Colleges Ontarie face of such adversity.

Graduates were awarded degrees across a broad range of disciplines including Engineering, Science, Business, IT, Humanities and Tourism & Hospitality.

The Institutes of Technology and Technological Universities in Ireland have a long-standing relationship with the members of Colleges Ontario, enabling students to move from Canada to Ireland to complete their degree studies in just one year for Advanced Diploma holders and two years for Diploma Holders.

Martin Kelly, Director of KOM Consultants, the Ontario representative of the three colleges also attended the ceremony. Enterprise Ireland, who sponsored the event, was represented by Lydia Rogers from Sligo and Shaun Ryan from Dublin, both now working in EI’s Toronto Office.

A spokesperson for the organising committee said afterwards “given what these international students have been through it was appropriate that we gave them and their parents an opportunity to celebrate their graduation at an Irish-style event”.